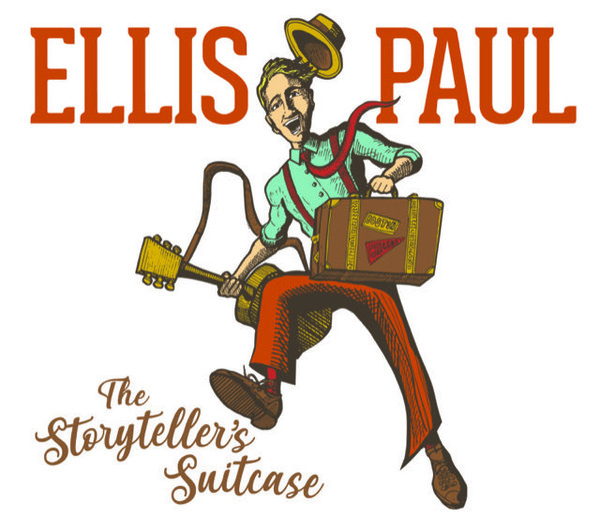 "This is my true-life story of karma and coincidence", Ellis Paul sings in "The Innocence and the Afterlife," about halfway through his new album, The Storyteller's Suitcase (due May 31 on Rosella Records.) The song is one of the greatest highlights of the disc, and Paul recorded it during a turning point in his life post-divorce and in the midst of moving on from a great number of things. To boot, according to his bio, he has been battling a disease called Dupuytren's Syndrome, which folds the fingers shut and makes it difficult for him to play piano or guitar. Not that this has stopped him from writing remarkable songs. Indeed, Paul has always been a ruminative, deep-thinking songwriter/storyteller, and The Storyteller's Suitcase is another example of his adept approach to his craft. Once again, we're treated to his particular brand of narrative lyricism and expressive vocals, his catchy melodies and delightful, easy harmonies. Where many artists might be tempted to deliver an album of stripped-down basics at such a moment in their life, Paul has instead surrounded himself with a lush band of supporting players: Hammond B3 organ, 12-string electric guitar, harp, mandolin, fiddle, and vocal harmonies. The result is a warm, robust collection that digs into the push-pull of relationships, reminiscing, grappling with mortality, hope, regret, and what it all means. The title track is an homage to the touring life of an itinerant songwriter, the various bizarre places one occasionally finds oneself between gigs. In the end, though, the common thread through it all is the people that you meet and the friends you make. "If you're gonna ride this poet's highway", he sings, "friendships are how you keep score. A song is just a skeleton key that can open any palace door." Another easy highlight comes in at track two, "You'll Never Be This Young Again", which carries the long tradition of carpe diem poetry forward via folk song. ("Take a deep breath, you'll never be this young again." ) "Slingshot" seems like it's perhaps another tune along these lines ("Are you living in the moment now?"), but then Paul deftly weaves in themes about falling in love and saving the world. It's the kind of storyteller sleight-of-hand that few songwriters can manage, but maybe that s what The Storyteller's Suitcase is for. Review by Kim Ruehl for Folk Alley (May 24, 2019) --Folk Alley