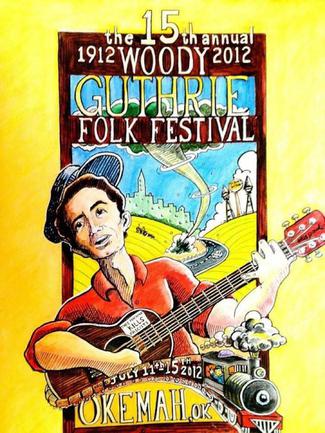 Most of the people who know me and my love of song, songwriting, and folk music know of my deep admiration for Woody Guthrie and his music.

In the mid 1990's I made a pilgrimage, one that I came to learn had been made by scores of other earnest folk singers throughout the years, to Woody's birthplace in Okemah, OK. It took a stop at the police department to be directed to the crumbling remnants of his birthplace home, which was nothing but foundation stones and a few boards and rusted nails. But there it was, the birthplace of American folk music's most important voice. I was thrilled to be there. I sang a song. Spoke to Woody's ghost. I stole a couple of the yellow stones from the foundation and as I was leaving, looked down to see my legs crawling with hundreds of tics from the site. This historic site needed some museum grade improvements.

I played in Okemah before the festival honoring him was established in the late '90's. And, to date, I've played all 15 of the festival shows, save one--- which I missed due to the birth of my little one, Ella. I've also been honored to be give honorary citizenship to the town of Okemah, and now serve on the advisory board of the festival, which is truly one of the best music festivals in the world--- not only do you get the best slew of American Americana, folk and singer-songwriters, you get to experience the historical side of Woody's life and times with the greater philosophical meaning of what this kind of music means. No one leaves the festival without a greater respect and love for Woody and whomever is their neighborhood folksinger.  If you love Woody and folk music in general, do yourself a favor and buy some sunblock, and come on out to Oklahoma.

This year, my design was chosen as the artwork for the festival posters and t-shirt. This is Woody's 100th birthday year, and so I was even more thrilled to be chosen. The original artwork, shown here, is being auctioned off by the festival both online at eBay and at the Festival. Put your bid in by Saturday! All the proceeds benefit the festival and it's various programs!  You can also pick up a t-shirt with the design.

Hope to see you there!

In honor of Woody's 100th Birthday, we're giving away a song for free to all of our friends and fans.  Off of Ellis' latest family album, "The Hero in You", the track was written in Woody's memory... we hope you enjoy!

To download, go to: www.nimbitmusic.com/ellispaul and enter Redeem Code: GUTHRIE.

An online auction of Ellis Paul’s original color pencil/pen and ink artwork created especially for this year’s Centennial Anniversary Woody Guthrie festival is currently taking place on E-bay, with the auction ending on Saturday, July 14 at 8pm - just before Ellis’ Saturday night set at Woodyfest.  Ellis donated his artwork to the coalition for fundraising purposes, with all funds going back into the Woodyfest community.