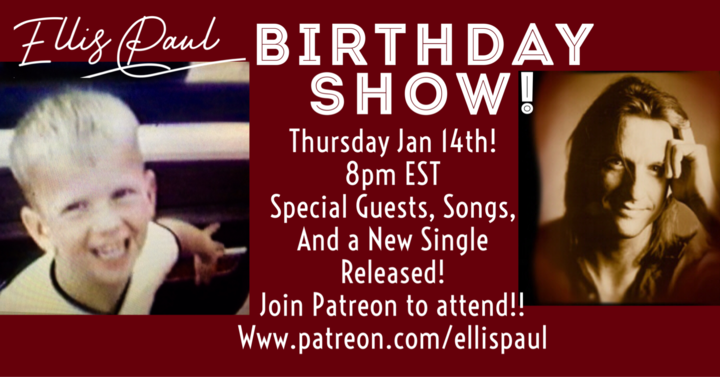 Like most of us, I am shocked by what I have seen in the past week. I am hopeful the transition of power will bring some stability and calm. I hope you all stay safe as we walk through the next few weeks together. There is a lot of mending fences to be done… and we all need to participate somehow.

I’m turning 56 on Thursday, January 14th, and when I close my eyes and blow the candles out - and there will be a lot of them! - I will be making a silent wish for – whoa - I just realized that for the wish to be granted, I’m not supposed to tell you! It’s an important enough wish to respect the superstition! I think we all are mostly wishing for the same thing. But I will keep this one close to my chest.

On January 14 at 8pm ET I will be playing a BIRTHDAY show on PATREON - my subscription site that is completing its first circle around the sun. For my birthday, I will also be releasing a new single on PATREON to celebrate! The song is titled “It’s a Mean World (2020)”. The livestream show will have special guests and songs and laughs… so take a break from your television screens. I will keep it light. We all could use it :)

IF YOU’RE NOT ALREADY A PATREON SUPPORTER, I HOPE YOU WILL CONDSIDER JOINING AND BEING A PART MY CREATIVE LIFE.

As my Patreon site begins its second year, I am issuing my annual invitation to join. The investment is as little as $1/month. During this past year I released an exclusive album for Patreon supporters titled Ellis Paul’s Traveling Medicine Show, Vol. 1. Seventy livestream shows (many including guest interviews with other artists) were archived. At least 25 unreleased songs from my back catalogue were shared in addition to specialty mini-documentaries and some private shows. Supporters also receive discounts on merchandise. Rather than this being like a Ginzu Knife commercial, I’d like to let you know that Patreon has kept my kids fed, kept my art alive, and of course, made it possible for me to survive financially during the pandemic.

Patreon has become my record label, book publisher, and art house. It’s a place to connect with me (and other supporters) personally. We used to buy CDs for $15 at shows and online. There is no touring now and, as the years go by, even less people are buying CDs. But for the approximate cost of one CD or show, Patreon supporters have access to all the digital content I create. There will new albums this year, art, livestreams, teaching shows, interviews, more documentaries and much more. If you are a fan of my music, writing, or art, Patreon is the place to have access to it…long before the rest of the planet. At the higher levels beyond $1/month, you will get stuff in the mail, one-on-one sessions, private shows and more. Thanks for listening to that.

In other news, this week’s Traveling Medicine Show on Friday night features special guest Alastair Moock, who just turned down a Grammy nomination for children’s music because of a lack of diversity among those nominated. (No women, no people of color.) He’s a hero of mine, and a great songwriter.

Hey, I don’t know if you are like me…..but right now it is really hard for me to focus. January is typically when I re-assess my needs and get a game plan together with new goals and resolutions. All the turmoil in our country is making that difficult….so I’m gonna circle the wagons with my family and community - and probably wait until February before I do a big reboot this year.

In the meantime, come to the livestream shows…they are a healthy distraction from the news cycle!