Tomorrow is Election Day!  Please make sure to VOTE! 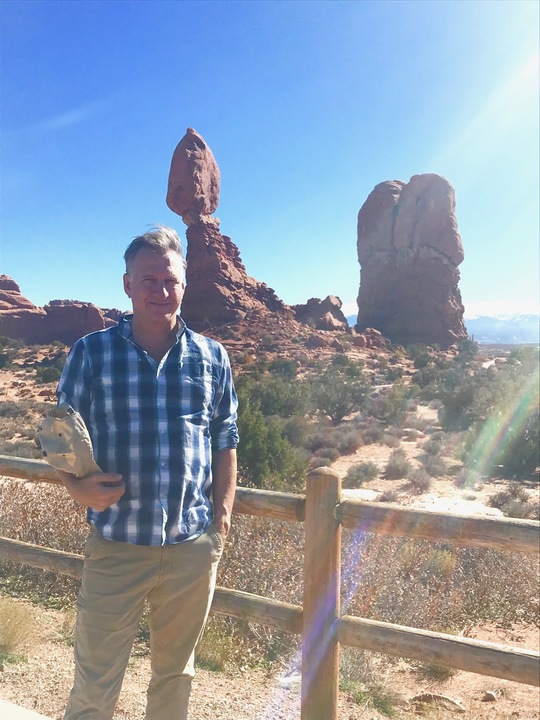 One of the spots I visited this past weekend at the Moab Folk Festival.

I am happy to announce that the link below leads to a brand spanking new video of a song from the upcoming The Storyteller’s Suitcase called “Election Day”— I hope it inspires you to VOTE tomorrow! I’m in the last sessions of recording The Storytellers Suitcase, and “Election Day” was ready to be heard, and it’s timely, so BAM!  The artwork for the video was done at my home over the last couple of days in a flurry of scissors and markers and construction paper. Nothing like deadline to create some wild animated hijinks! I can’t explain how inspired I am by this new group of songs and by how great the album sounds. But you will see it in the video. I can’t wait to have the album on the road with me.    This song is just me singing accompanied by Craig Akin on upright bass and Brian Caputo on drums. Craig was so musical and Brian so inspired that the thought of doing additional instruments was unnecessary. Listen to that improved bass solo! We recorded it all live, and you can feel the emotion, and the dance and the spontaneity. This all feels like a new start to me, with songs that mark my place in life exactly where I am. More to come! Here’s the link to the video for “Election Day”. Please share it with family and friends to get them to vote!

If you haven’t yet donated to The Storyteller’s Suitcase, there’s still time to help with the cost of it’s manufacturing and promotion.  Simply click HERE:  https://www.ellispaul.com/fundraiser/

You may already know that I mentor and teach artists as I tour around the country, and a couple years ago I founded The New England Songwriter’s Retreat.  You should join us next year if you write and play. I’m including two new songs written by students on this album. “Election Day” was written by Mike K Brown, who was in one of my classes at the Swannanoa Gathering. It’s a traditional song with new lyrics. Mike is in his 60s and has this great honest sincerity to his voice and lyrics. It’s a voice you can trust to tell you like it is. My jaw dropped when I heard him sing the song for the first time in a circle of musicians on a hillside. I felt like Woody Guthrie was coming right out of his lips. So I had him sing it for me again….and again…and again.  He probably played that song for me five times. I was stalking that song….thinking that it’s magic might wear off with additional listens. But it only convinced me how brilliant it was. I think you will think so too!

You may know that I love to find and encourage and mentor new artists. Now, I am committing to putting their songs on my projects as well. There’s a story of Arlo Guthrie getting cornered and bribed for a beer at a Chicago bar by Steve Goodman to listen to “City of New Orleans”.  I bet that was the best tasting beer Arlo ever drank. That’s exactly how I am feeling about Mike’s song and a song written by Kyle Hancharik.  I will send Kyle’s song out to you soon! They mesh with mine beautifully and you’ll be happy to discover two new songwriters.

I spent a beautiful weekend at the Moab Folk Festival, and again was so amazed by the wide variation in climate and geography in this country. I took a quick tour of Arches National Park. I heard a Shawn Colvin set and two Sam Baker sets…. and felt lucky to be in the wash of their talents, as different to one another as Moab is to New England.

This weekend I roll into the Blue Door in Oklahoma City to record two shows for a live album due next year. I’ve been playing this place for years and it’s one of the cornerstones of my touring life. I don’t know exactly what it is about Oklahoma— there is alot here, the people, musicians, Woody Guthrie. Greg Johnson’s place epitomizes the whole state of affairs with its concrete floor and folding chairs. Sing-Alongs and cheers. Come on out and get your voice and applause recorded as I rip through my most recent songs!

Lucky to see the country. Hear these voices. Sing these songs.

We will talk soon! Come out to a show, come say “hi” when I roll in into your town!

Best to you! Ellis