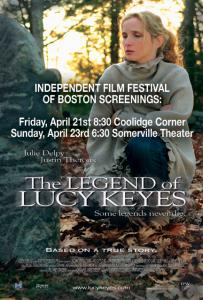 The Boston area premiere of The Legend of Lucy Keyes featuring music by Ellis Paul and Flynn will take place as part of the Independent Film Festival of Boston. Screenings are scheduled at 8:30pm April 21st at the Coolidge Corner Theater and at 6:30pm April 23rd at the Somerville Theater. Stay tuned for details about the Lucy Keyes party being held as part of the festival.