Ellis Paul: Songs from the map of life 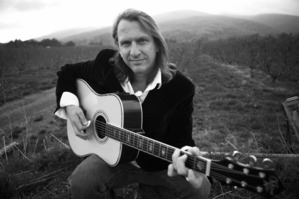 "He wouldn't call himself a master of his craft.

But after 20 years as a performing singer-songwriter - one of the more consistently lauded in contemporary folk circles - Ellis Paul is definitely at his best...

"I'm certainly not (Bob) Dylan or Joni Mitchell or even John Prine," he says, "but after 20 years, you have to trust your own voice. You hope that you're getting better and trying to raise the bar in some way every time. That stuff I'm concerned about, but 20 years has given me a lot of faith and trust and sometimes you just have to release it to the world and let it be.  I'm definitely the best Ellis Paul that I've ever been."

For the venerated troubadour, such artistic growth hasn't necessarily brought commercial success. But Paul, who emerged from the fecund Boston folk circuit that also gave rise to the careers of artist such as Dar Williams, Tracy Chapman, Martin Sexton and Patty Griffin, was never after that level of fame. The Maine native is widely considered one of Boston's finest musical exports - he's racked up 14 Boston Music Awards and even had Mayor Thomas Menino declare a day in his honor last year - and over the course of 16 albums has proven himself an astute philosopher and poet of the human condition. And it is this that he is still after, the ability to lyrically capture those moments that speak honestly to the joys and sorrows of life's journey - or what he refers to as small cultural events - and hopefully leave the listener with a greater empathy or understanding.

"There are a ton of songs I've written that have no cultural or social value whatsoever. They just entertain," says Paul. "My shows are a combination of humor and emotional content. You get an occasional pop song thrown in, then you get a song about Katrina, where a victim of a natural disaster is struggling to make ends meet and wondering what is the government going to do for him, and then a song about drinking in a bar - it's really about capturing the wide swath of life, family and work and play, the stuff that's important, and the stuff that occasionally is not so important but sort of necessary." "

read the full article: Ellis Paul: Songs from the map of life