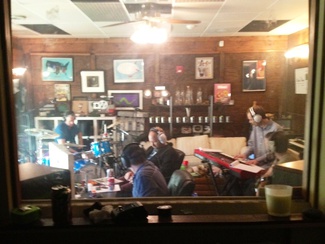 Ellis in the studio in Atlanta with the Sugarland crew

I'm heading back to Atlanta to put the finishing touches on the new CD project--- we are recording at Kristian Bush's place with Kristian and Brandon Bush producing. Some of the songs I am currently playing at shows --- "Kick Out the Lights", "Chasing Beauty" and a few others may make an appearances as well. I'm thrilled with how it is sounding, I couldn't be surrounded by better friends and musicians. It reminds me a bit of the album "Stories" in that the songs are narrative and little movies in a person's life. I'm thrilled to have Kristian and Brandon bringing their years of expertise to the project and honored to have members of Sugarland playing as the band.

The songs are focused around Guinness, my guitar, who plays a bigger role on this project than any guitar on any previous recording. I think you'll love the results.

We are in the final months of fundraising! If you would like to help partner this project to completion please jump on board soon! We have over 500 enthusiastic partners that have helped this project come to life-- Click this link to get involved, we need your help to bring this home!

I'm playing all over the country this summer--- this weekend I am swinging up to NYC at Joe's Pub on Friday, Homer, NY on Saturday-- then the northeast the following week and Atlanta after that! Check out the schedule and come hear some new material and the older songs as well--

Hope you are basking in sunshine--
Cheers!
Ellis

Ellis will be making his way up to NYC for a show at Joe’s Pub on Friday night, then starting his Saturday off with a special family show at James V. Brown Library in Williamsport, PA.

He’ll be ending his weekend with a show at the Center for the Arts in Homer, NY on Saturday night, with Ellis' friend, fellow musician Flynn opening. Here’s a great article from the Syracuse New Times that was just released in anticipation of the show!

Here’s your chance to own a beautiful piece of art, designed by Ellis himself! We're so excited to have just launched a special section on Ellis' website to showcase some of his artwork that's for sale.. take a peek and check back often, as new pieces will be added as Mr. Paul creates them!

If you head over there now, you can check out a gorgeous one-of-a-kind hope chest, hand carved and painted by Ellis, featuring the likenesses of MLK Jr., Ghandi, Lincoln, John Lennon, and Nelson Mandela on top, with a quote from MLK on the inside cover.

Email Justine at ellispaulproductions@gmail.com with any questions or interest in this piece or any others.


Some more album and fundraiser updates!

Ellis’ upcoming studio album is now slated for a late summer / early fall release, due to some much needed vocal rest over these last few months. Ellis is now back in the studio with the Bush brothers and Sugarland crew, wrapping up the album and laying down the vocals on all the new music.. And here’s some good news: There’s still time to donate to the fundraising project in support of the new album!

With your donation, you can be the recipient of tons of exclusive Ellis Paul music, behind-the-scenes video footage, and other exciting perks. We're so beyond thrilled, humbled and appreciative of all of the support we've received so far, and we're almost there!! If you haven't yet donated, now's the time! Head on over to Ellis’ store where you can check out each donation level and everything they have to offer!

Ellis will be playing some incredible music festivals this summer! Be sure to check out his tour page where you’ll find more information and details on all of his festival plans.. We'll be starting off July with the New Bedford Folk Festival in New Bedford, MA, Woodyfest in Okemah, OK, and Black Potatoe Music Festival in Clinton, NJ, followed by the Philadelphia Folk Festival and Falcon Ridge Folk Festival in NY in August. Come hang out with Ellis and stay for tons of great music!

See ya out there!