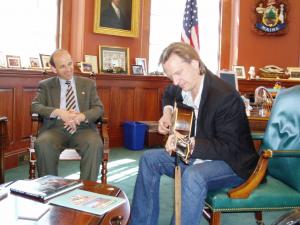 On Thursday, May 12th, Ellis Paul has been invited to perform his newly written tribute to the state of Maine for Governor Baldacci and top members of the government. Originally hailing from Presque Isle, Me., Ellis Paul has made a name for himself in and around the New England area and "is now a national folk star" says the Boston Globe.

His latest release, American Jukebox Fables (Philo/Rounder), fuses all musical genres, extending his stories of romance, family and truth to reach new listeners. Paul journeys from the depths of his heart in songs like "Home," to the hills of Afghanistan in "Kiss the Sun," where he explores the strength and courage of former NFL player, Pat Tillman, and all of those who serve our country.

On Thursday, Paul will pay homage to the state of Maine on Thursday at the state's Capitol. Then on Friday, May 13th, The Center for Cultural Exchange in Portland, Me. hosts an evening with Ellis Paul as a homecoming concert. ^