A road trip across the palm tree plains of scenic Florida. St. Augustine to Pine Island.
Chasing the shadow of the manatee.

On the west coast of Florida there is a novelist typing daily at the keys by the name of Randy Wayne White. Randy fills pages and pages with Florida based mystery stories. When he writes "the end" and ships the manuscripts out of the tiny post office on Pine Island, they tend to wind their way to the New York Times best seller list. He has a comfortable cabin home that looks out onto the seas that is isolated enough to give him clarity and peace of mind to be creative with little interuptions. Randy is well known in these parts. I think he is the unofficial mayor of Florida. Anywhere in Florida. He's a mystery writer and an entreprenuer and has sliced a piece of Heaven amongst the palm trees and archeological monuments of Pine Island. His property sits aside the ancient home of the Calusa Indians. They had built a small city here that the Spaniards called Tampa. The name migrated north but the mounds remain. Pine Island had anywhere between 3,000-10,000 inhabitants, and was essentially a capital city for all tribes in the area. The Calusa built several mounds across the landscape and on surrounding islands that rise above sea level and allowed them a sacred place for ceremonies, an observation place for defenses and a view of the glorious kingdom they owned. Randy is extremely respectful and awed by the history of the place. He took us on a walk at midnight up to the highest of the mounds-- the place is a state historical and archealogical site and is well maintained and protected.

He and his girlfriend created feasts of ham, greens, star fruits, and wine for our dinners. It was as if the ancient Indian ceremonies needed some kind of twenty-first century updating. His girlfriend Wendy, whom I was happy to discover is an accomplished songwriter, played beautiful piano and sang songs and made us feel awash with comfort. We took their hospitality to the extremes and came back for more at the end of the weekend. It was a weekend of wine and song and much appreciated after the Ringling style circus of our New Year's Eve shows...

Randy took us out to Useppa Island which is a get away for well financed families from all over America and is somewhat remiscent of tiny Martha's Vineyard. This place calls out for R and R Florida style. Orange trees are everywhere. Beautiful bungalow houses line the beaches and a pleasant Casablanca kinda bartender presides over the place and poured us whiskey sours. This would be a great place for a songwriting retreat and we laid the groundwork for that over the weekend. Keep an eye out.

I had three wonderful shows. A private party for the twentieth anniversary of Jay and Lisa in Clearwater, Florida seemed like a cast party for desperate housewives!! I have never seen a crowd enjoy themselves more. I want to thank the dancers, and the screamers . Jay and Lisa's 15 year old kid Joe played for me an extremely good version of "Maria's Beautiful Mess" that was mind blowingly exact. It was like somebody took my hands and put them on his arms. The day before we spun over to St. Augustine for a coffeeshop gig at Cafeleven. It's a great place for dinner too-- thanks for the salmon, guys, and a perfect for delivering what I do..., and the next morning I was the recipient of a helicopter trip from new friends, Mary and Dale. We went over the city and the lighthouse and swampy parks there. The town is the oldest city on America and still retains much of it's European influences. My first helicopter ride ended without hospitalization. The chopper was teeeny. But very cool. And I'm alive. Even cooler.

My friend David Lamotte allowed me to jump onto his Tampa gig at the UU Dome church in Tampa and I really enjoyed sharing the stage with someone who I have known for years...

I also furthered my relationship with Michael Kelly guitars, and picked up a new one at their offices in Clearwater. Be on the lookout for new guitars at future shows!Here's some links for curiousity seekers...

Randy Wayne White's websiteWendy Webbs websiteSee y'all out there!
EllisRandy, Ellis, Ralph Jaccodine the sun, ocean and fish (not pictured, but there) 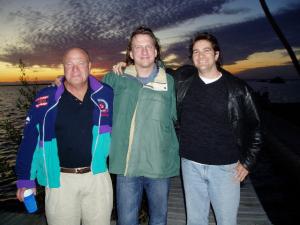